By Colin Lecher and Jon Keegan
Viewable online at
https://themarkup.org/citizen-browser/2021/01/14/biden-and-trump-voters-were-exposed-to-radically-different-coverage-of-the-capitol-riot-on-facebook

But people logging into Facebook weren’t all seeing the same stories. Some Facebook users with different political leanings saw the riot through very different lenses, according to data from The Markup’s Citizen Browser project, which tracks the links served to a nationwide panel of Facebook users.

By analyzing Facebook feed data from hundreds of the panelists in the project, The Markup found that panelists who voted for Joe Biden in the 2020 election were more frequently exposed to news stories from nonpartisan outlets directly covering the riot at the Capitol and the certification of Biden’s win, like The Washington Post and The New York Times, while our panelists who identified themselves as Trump voters in the 2020 election were more likely to be exposed to conservative news coverage, led by online outlets like The Daily Wire and Breitbart.

The two groups were exposed to barely any of the same news stories. 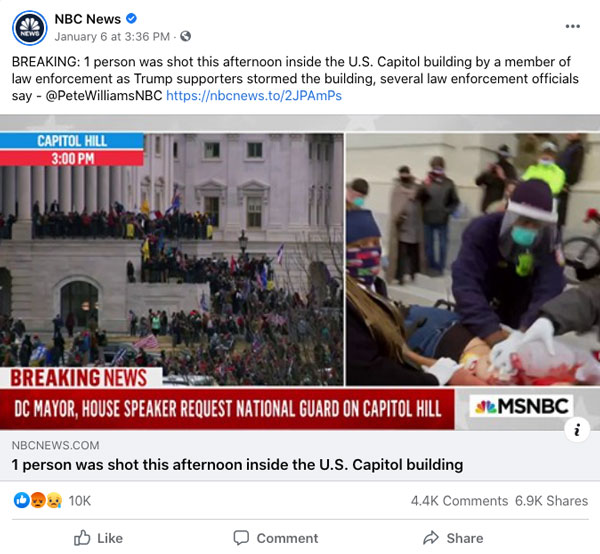 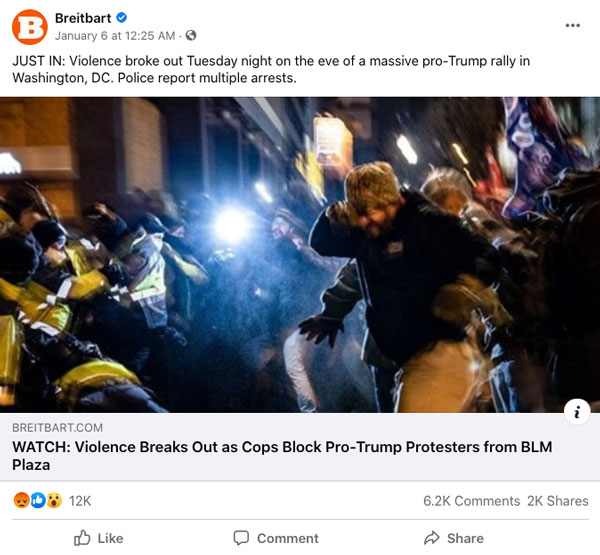 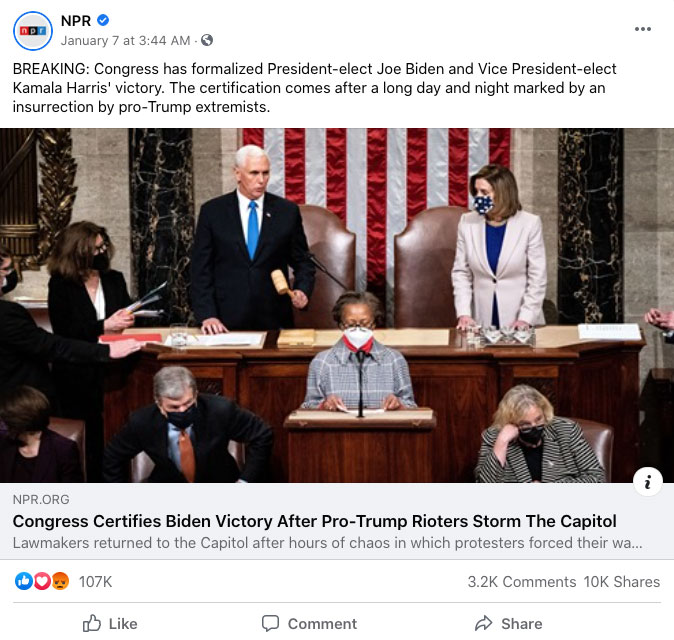 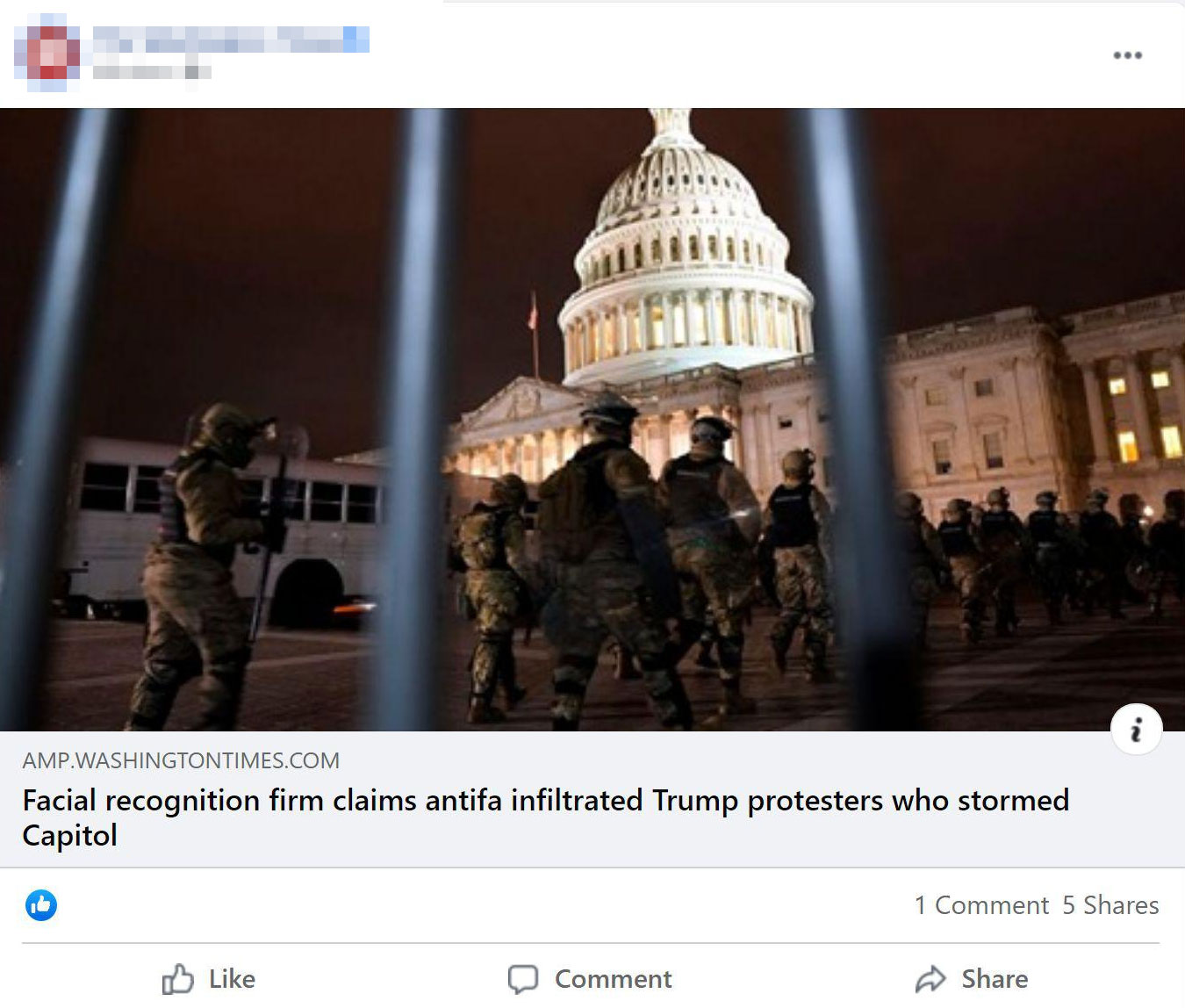 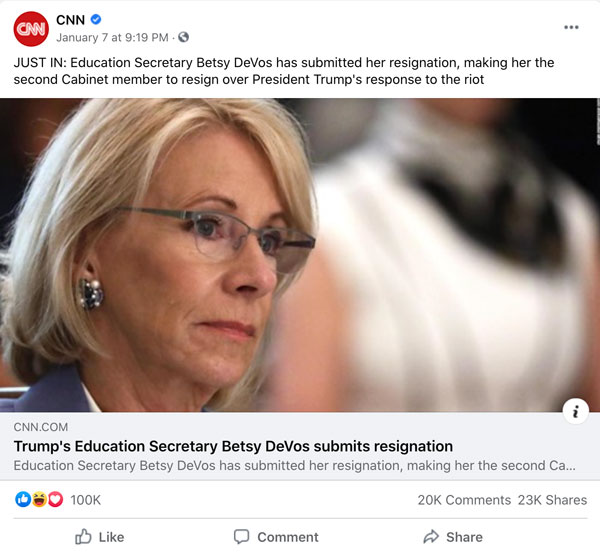 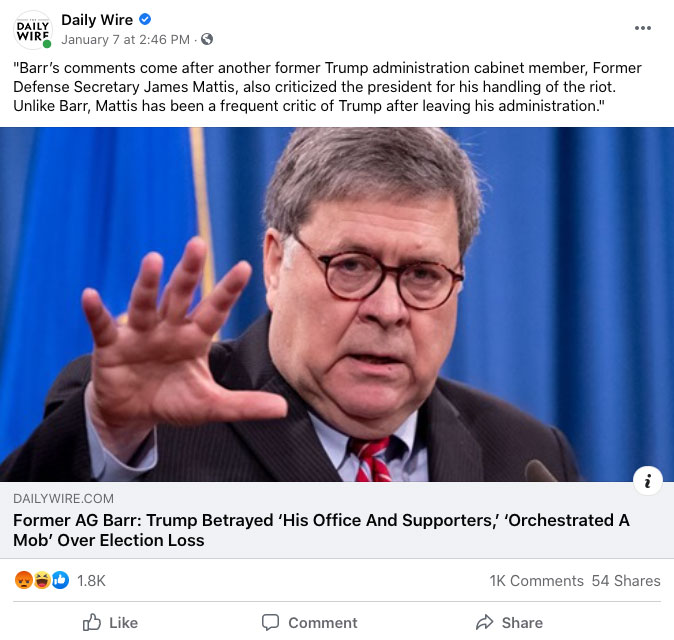 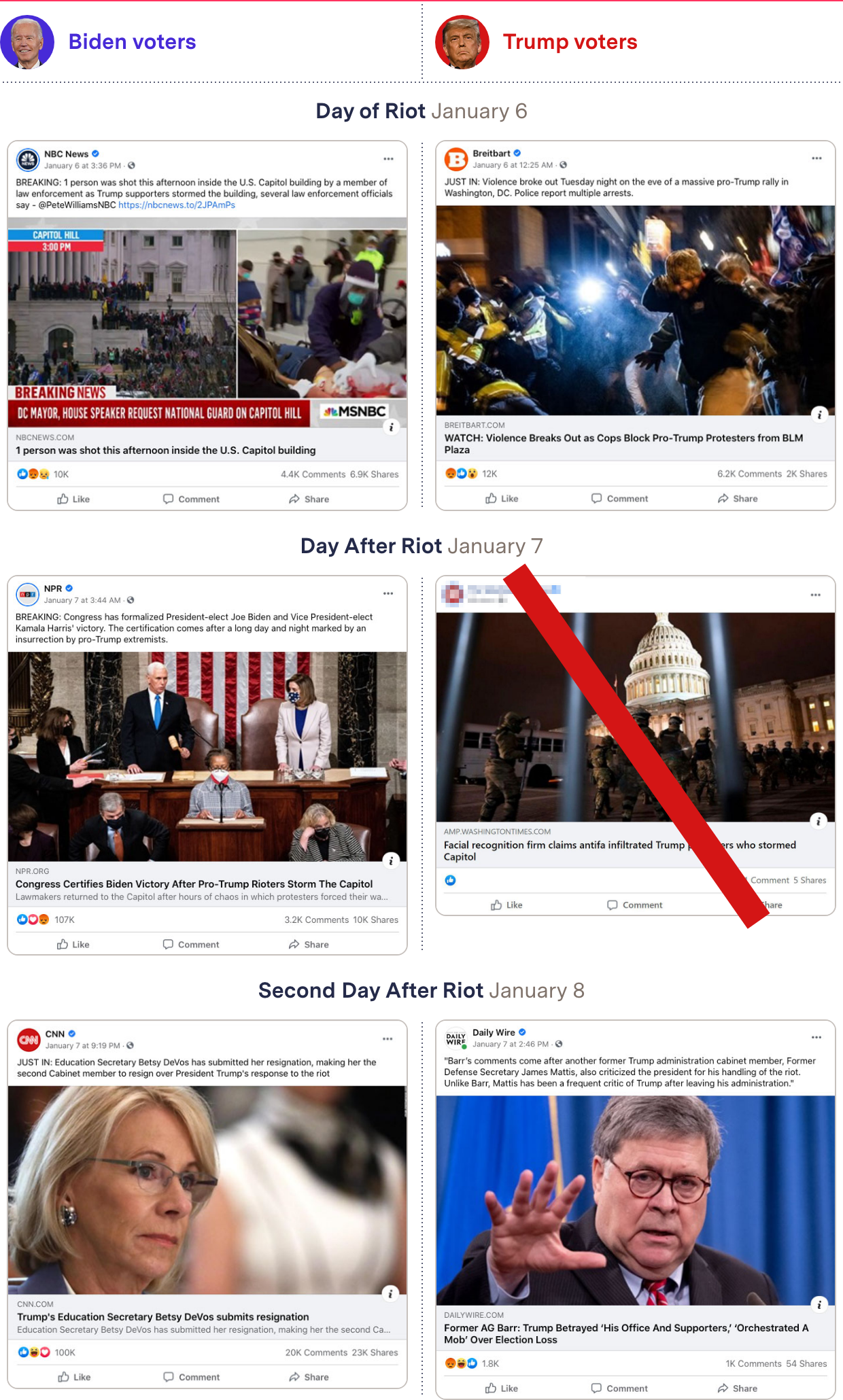 A graphic showing two columns, one for Biden voters, one for Trump voters, showing examples of the differences in articles received.
Red rule indicates that a post contained misinformation. In the example here, The Washington Times later corrected the post. Source: Citizen Browser/The Markup. Complete data available on GitHub.

“It should not be surprising that people with different partisan leanings saw different news sources on Facebook, just as they do with television, radio, and other forms of media,” Facebook spokesperson Kevin McAlister said in an emailed statement to The Markup. “However, we’ve made it clear to everyone at the top of Facebook and Instagram and through our Voting Information Center that President-Elect Joe Biden won the election.”

Although it’s hardly a secret that Facebook serves different news based on the different interests of its users, it’s rare to see data on the practice.

The Markup’s Citizen Browser project, an initiative looking at what content Facebook chooses to amplify to its users, has enlisted paid participants nationwide to install a custom tool that allows us access to their Facebook feeds. On any given day in December or January, an average of 775 panelists shared their Facebook data with us. We remove potential identifiers from the data we collect and analyze the remaining information about what content the panelists were exposed to.

To determine what sorts of news about the riot at the Capitol appeared on our panelists’ feeds from Jan. 5 through Jan. 8, 2021, we searched our Citizen Browser data for Facebook posts served to them using terms like “Capitol,” “protest,” “riot,” and “mob.” We discarded any posts that were ads or not related to the Capitol riot. We also discarded domains that only appeared in one panelist’s feed. After filtering those out, our data included Facebook posts served to 95 users who voted for Trump in the 2020 election and 348 who voted for Biden. These posts contained 747 unique links from 168 domains.

The sample size is small compared to the 196 million American and Canadian users on the platform, and our panel is short on Trump voters and Latinos. And while some posts we analyzed were served to as many as 30 users on our panel, many were served to one or two panelists.

But the data provides a snapshot into a split ecosystem, where users are often served different news depending on their partisan preferences and rarely have a chance to see the differences.

The news landscape our Facebook panelists encountered was deeply polarized. In all, of the hundreds of riot-related links we analyzed, only 5 percent of the links (35) were in common among our panelists. One such crossover link was a New York Post story about the fatal police shooting of Trump supporter Ashli Babbitt. 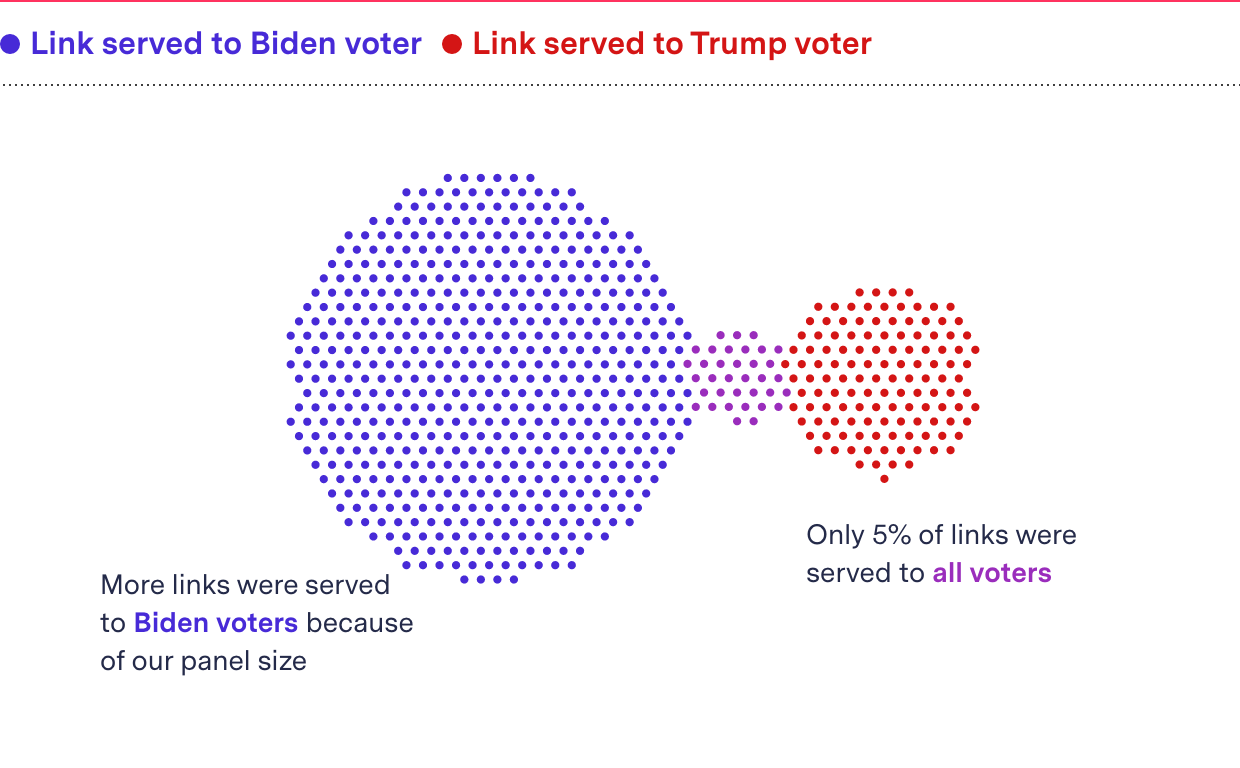 The Facebook feeds of self-identified Biden voters in our panel contained links from The New York Times and NPR about Congress approving Biden’s win, served to panelists a combined 29 times, or a Washington Post article examining the bungled law enforcement response, which was served to nine panelists. Coverage from CBS News, served to seven Biden voter panelists, but only one Trump voter, was about a West Virginia lawmaker who had posted a video of himself storming the Capitol shouting, “We’re in!”

The links most frequently shown to Biden voters were sometimes posted directly by the news outlets who published them, but their spread was also fueled by partisan Facebook pages like “Trump Sucks,” which has more than 800,000 followers, or by the even more popular “Occupy Democrats,” which boasts more than 10 million followers.

But for our Trump-voting panelists, coverage of the event came more frequently through conservative outlets, and popular links often homed in on the political and media response to the riot.

Our panelists were served articles from The Daily Wire, for example, focused on remarks from Joe Biden and Chuck Schumer, who described the riot as, respectively, an “insurrection” and the cause of a day that will now live in “infamy,” drawing a parallel to Pearl Harbor. A Breitbart article focused on Michelle Obama, who called the riot the act of a violent “gang.” Two or three panelists in our sample of Trump voters were served each of those links.

Another Daily Wire article, served to another four of our Trump-voting panelists, focused on the defection of Republican senator Kelly Loeffler, who stepped away from a plan to object to the certification of Biden’s win.

In the Capitol-riot-related posts on our panelists’ feeds, we saw at least one clear instance of outright misinformation: a viral story from the conservative Washington Times claiming that pro-Trump rioters were identified as members of antifa through facial recognition. The article, which has since been corrected, was served to four Trump voters in our sample, putting it among the most seen links in that group.

Mainstream media’s coverage of the riot also became a target for stories from conservative media that made their way onto our panelists’ feeds. One article from The Federalist seized on the news to list “28 times media and Democrats excused or endorsed violence committed by left-wing activists.” An article from the Daily Caller showed a Fox News host bemoaning media coverage of the riot and claiming the left had tried to “pick and choose their favorite protestors.” Some links that appeared on our Biden voter feeds focused specifically on right-wing coverage of the riot.

“We have very little purview into what’s happening on these platforms, who’s seeing what,” said Jennifer Grygiel, an assistant professor of communications at Syracuse University with a focus on social media platforms. “And that’s a problem.” 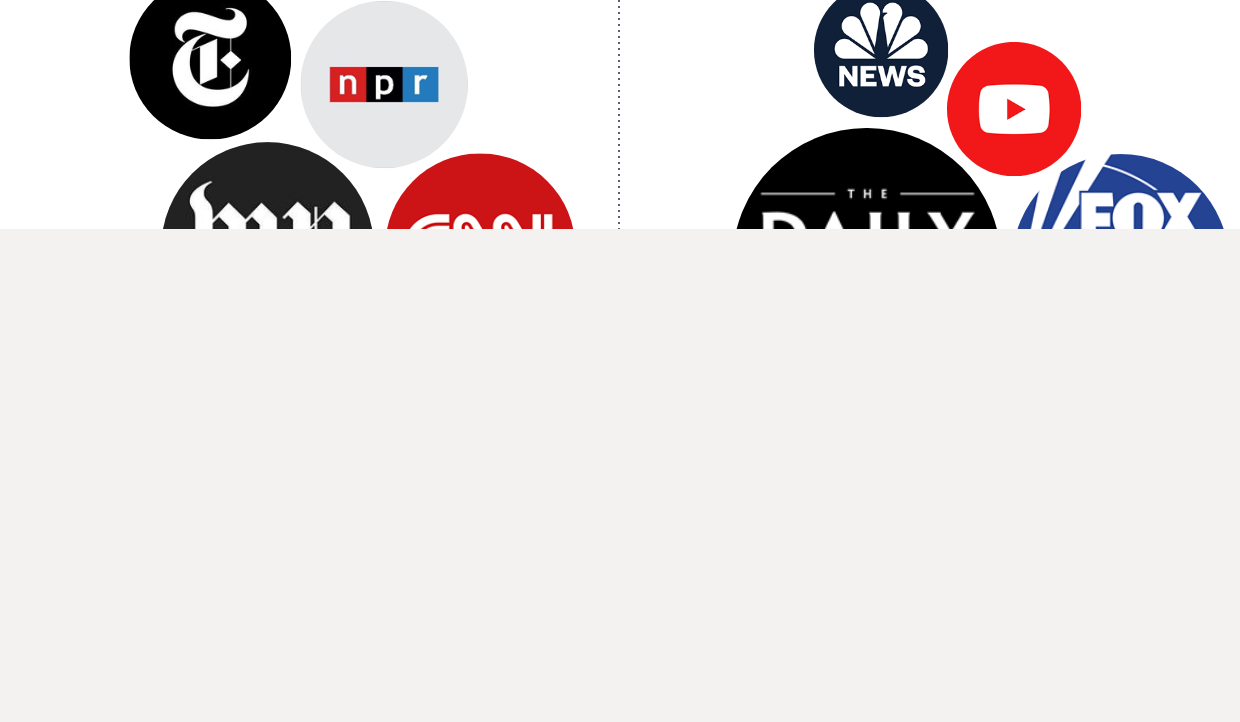 Graphic showing the different sources of articles seen by Biden and Trump voters in their feeds, with larger circles representing more feeds shown.
Circles are scaled proportionally based on the relative number of Biden and Trump voters. Source: Citizen Browser/The Markup. Complete data available on GitHub.

Our analysis can’t say exactly why any link was especially popular among our panelists, but it’s clear from Facebook comments that many readers were drawn to certain articles because they stirred partisan tensions.

Some of the stories that appeared in our Trump voters’ feeds received thousands of comments.

The top Facebook comment on the story about Loeffler, a post from the conservative Daily Wire put on Facebook under the page of site founder Ben Shapiro, called her change in stance “a disappointment.” The top response to another Daily Wire article, about Republican representative Adam Kinzinger calling for Trump’s immediate removal from office, suggested Republicans wanted to remove Trump “because he can declassify what they don’t want us to see.”

By contrast, a top Facebook comment on a CNN article about the resignation of Education Secretary Betsy DeVos, posted by the page Being Liberal, offered a cheeky send-off: “Bye bye Betsy!”

While the Daily Wire was a popular source for our Trump voter panelists, we found only one Biden-voting panelist in our data whose feed contained a link for a Daily Wire story, an article about Trump making a statement that he was “outraged by the violence.”

News coverage of Trump’s own words also diverged depending on a panelist’s political leanings. In the Trump voter sample, one article that appeared on the feeds of two panelists was a Fox News piece that focused on a Trump video statement condemning the “heinous attack” on the Capitol, which came after his earlier encouragement of the gathering. The article was served to one Biden panelist.

Ten Biden voter panelists, in comparison, were served an NBC News article that focused more directly on the violence and Trump’s role in inciting the attack, pointing out he had told his supporters earlier that “we will never concede.”