By Angie Waller and Colin Lecher
Viewable online at
https://themarkup.org/citizen-browser/2021/09/22/germanys-far-right-political-party-the-afd-is-dominating-facebook-this-election

The post was soon shared by thousands of users and commented on by thousands more. It was one of many posts by AfD-related pages over the past couple of months that railed against immigration or, another popular topic, disparaged COVID-19 restrictions as unnecessary.

Despite its modest size in Germany, the AfD has been remarkably successful on Facebook. Data obtained through The Markup’s Citizen Browser project, in partnership with Germany’s Süddeutsche Zeitung, shows how the AfD has gained tremendous traction on Facebook in the run-up to a historically contentious national election to replace Angela Merkel, the long-serving chancellor, later this month.

The Citizen Browser project, which collects data from a diverse panel of 473 German Facebook users, shows the party and its supporters have peppered Facebook with pages promoting its ideology, with posts on those pages appearing in our panelists’ news feeds at least three times as often as those from any rival party.

Fewer unique panelists had posts from AfD-related pages appear in their news feeds than posts from the sister parties of the Christian Democratic Union of Germany (CDU) and the Christian Social Union in Bavaria (CDU/CSU), which led in this count, and from Bündnis 90/Die Grünen (Alliance 90/The Greens). But the data shows AfD deeply engaged with its core audience: The users who did see content from the AfD tended to see it repeatedly, and the AfD was especially good at reaching its own supporters.

Citizen Browser captures up to 50 posts from a panelist’s Facebook news feed one to three times a day. The Markup catalogued every time a post from a page named for a German political party appeared in our panelists’ feeds over the past two months, from July 20 to Sept. 16, 2021. We included any pages that mentioned “AfD” or one of its political rivals (“SPD,” “CDU,” or “FDP,” for example) in its name. We did not determine whether the page was officially sanctioned by the party itself. We removed any pages meant to disparage a party.

Posts from more than 200 different pages promoting the AfD party—the most pages of any party we looked at—appeared in our panelists’ feeds. While the quantity of pages promoting the center-left Social Democratic Party, the SPD, followed closely behind with 175 pages, posts from AfD pages appeared four times as often in our panelists’ news feeds. Our panelists were shown posts from the AfD more than 3,200 times, while they were shown SPD posts only about 760 times.

The other major political party in Germany, the center-right Christian democratic political alliance, or the CDU/CSU, fared slightly better. Posts by pages related to those parties appeared in panelists’ news feeds around 850 times. But the AfD’s posts still appeared more than three times as often.

AfD and Its Supporters Peppered Our Panelists’ News Feeds with Posts 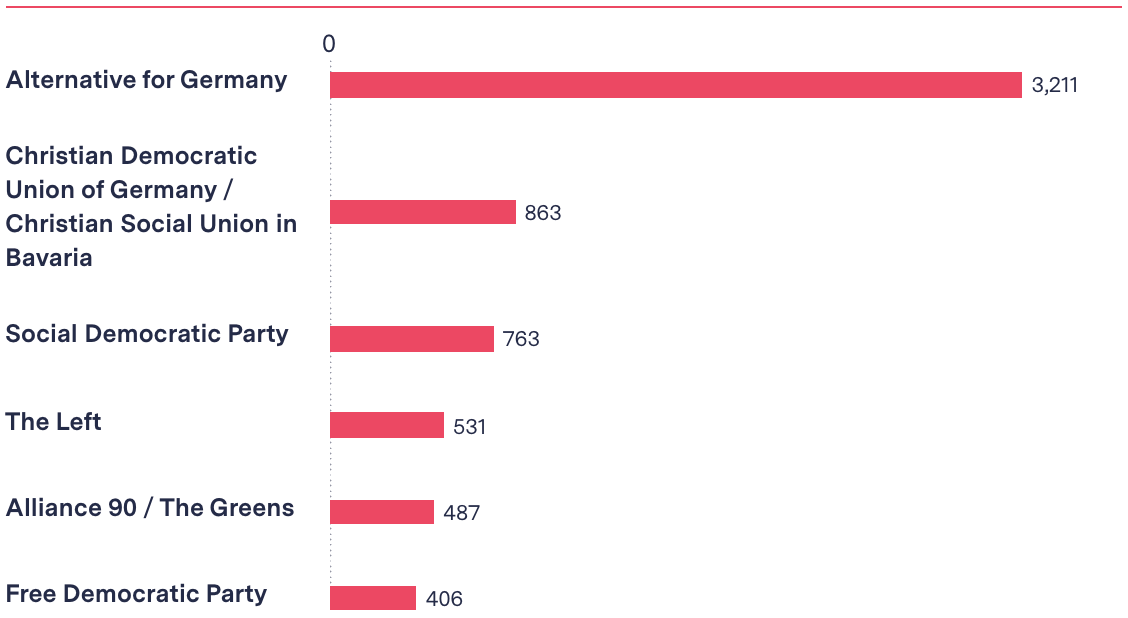 Source: 473 panelists from The Markup/Süddeutsche Zeitung/Citizen Browser, from July 20 to Sept. 16, 2021. Complete data available on GitHub.

“Given its very limited number of participants, data from The Markup’s ‘Citizen Browser’ is simply not an accurate reflection of the content people see on Facebook,” Facebook spokesperson Basak Tezcan said in an emailed statement. “We actively reduce the distribution of content that is sensational, misleading, or are found to be false by our independent fact-checking partners. Our approach goes beyond addressing the issue post-by-post, so when Pages or Groups repeatedly share this kind of content, we reduce the distribution of all the posts from those Pages and Groups.”

The AfD did not respond to a request for comment.

Our analysis has limitations. Citizen Browser tracks a small percentage of Facebook users in Germany compared to the tens of millions of Germans on the platform and is unlikely to perfectly mirror what Facebook shows all of its users in Germany. On Sept. 1, Facebook introduced a new interface that affected captures for 3 percent of the panel across all parties. Some captures for this small subgroup of panelists could not be included in this study.

But the panelists represent a diverse set of party affiliations across the political spectrum in the country, from AfD supporters to centrists to far more liberal users.

And AfD’s savvy on Facebook has been documented in past elections.

The AfD’s Rise on Social Media

The AfD launched in 2013, initially as a conservative party harnessing skepticism of the European Union. Though it failed to reach the vote threshold for representation in the German Bundestag in the federal election that year, the group’s facility with social media quickly became evident.

“Directly in their beginning, in 2013, they began to install a very strong network of interconnected Facebook accounts for nearly all local branches of the party,” said Isabelle Borucki, an interim professor at the University of Siegen who studies German political parties online. The AfD operates on many platforms, but Borucki said it was clear the party “understood especially how this network works.”

AfD Had More Facebook Pages Than Its Competitors, According to Our Data 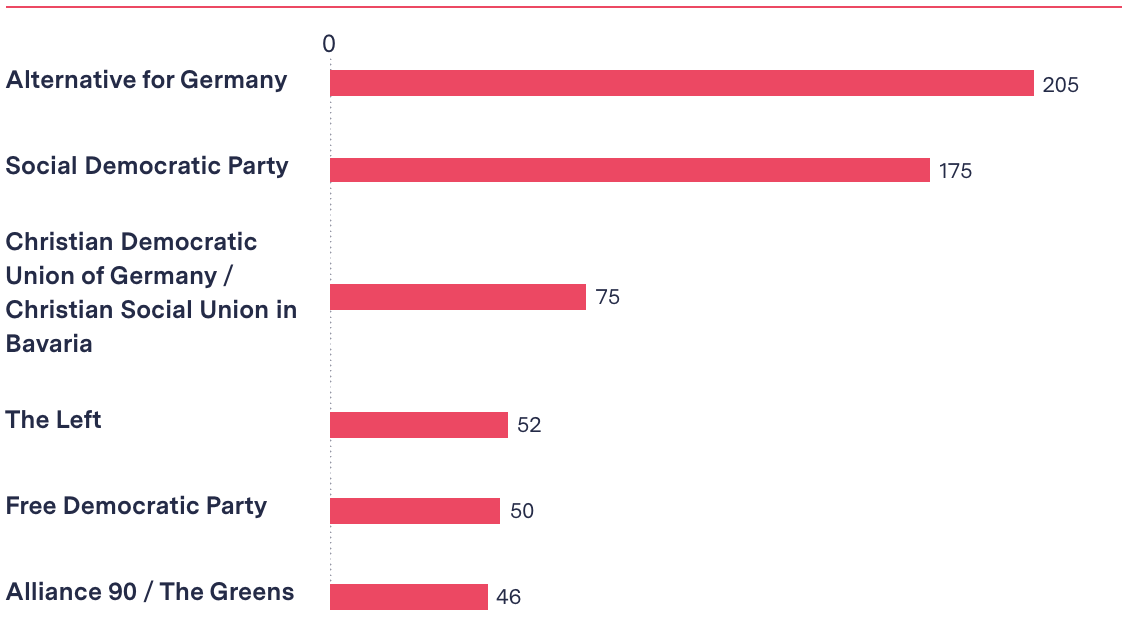 Source: 473 panelists from The Markup/Süddeutsche Zeitung/Citizen Browser, from July 20 to Sept. 16, 2021. Complete data available on GitHub.

By the next federal election, in 2017, the AfD had shifted further to the right, tightening its focus on issues like immigration. That year, the party captured about 12 percent of votes, part of a rising tide of right-wing populism in many Western countries. That performance made the party the third-largest in the Bundestag, behind the far more established SDP and CDU/CSU.

It isn’t just Facebook where the AfD has performed well, either. This year, a report from Süddeutsche Zeitung and AlgorithmWatch that relied on data from hundreds of users showed how Facebook-owned Instagram seemed to favor right-wing content, with posts from the AfD tending to appear higher up in users’ feeds.

While it’s difficult to say how social media popularity translates to votes, many observers have attributed the AfD’s growth, at least partially, to its social media strategy.

“They managed to use social media to explode and find people and citizens that weren’t interested in politics before,” said Juan Carlos Medina Serrano, a Ph.D. student at the Technical University of Munich who has studied the AfD’s use of social media and is now heading data operations for Germany’s Christian Social Union party.

In past elections, researchers and journalists have tried to measure how well the AfD has reached users on Facebook compared to other political parties. Like The Markup, they also found that the AfD has been able to use Facebook to find a large online audience.

After the 2017 national election, a Washington Post analysis noted that AfD posts had been shared more than 800,000 times that year, far outpacing all other major parties put together.

In 2019, one report found that AfD posts on Facebook accounted for about 85 percent of shared content from German political parties, according to Der Spiegel. A researcher told the outlet at the time that the AfD had become “the country’s first Facebook party.”

Facebook has highlighted its efforts to combat misinformation in past German elections. In 2017, after the last German federal election, the company said it had removed tens of thousands of suspicious accounts to clamp down on the spread of false information.

Facebook also announced earlier this month that it had removed a network of pages associated with Germany’s anti-lockdown Querdenken movement that promoted violent content and health misinformation. The movement is not directly aligned with a political party, although it shares its COVID-skeptical perspective with the AfD.

This month’s vote may present new challenges for the social network. In June, Politico reported that there had been a spike in election-related misinformation as far-right social media users appeared to be laying the groundwork to make claims of election fraud after the vote.

Experts point to several factors that have contributed to the AfD’s Facebook presence.

As the Citizen Browser data shows, the AfD and its supporters tend to run more active pages in general than their rivals, setting up relatively small, localized pages that garner support across the country.

The AfD, researchers say, also relies more on sensational, aggravating content, which is a perspective Facebook rewards with greater reach. “They trigger anger, fear—I would say anarchic or basic emotions,” Borucki said. “Those trigger people and affect people more than bare facts.” One recent AfD post found in our dataset bemoaning “climate hysteria,” for example, led to more than 5,000 “angry” reactions on Facebook.

This strategy seems to be catching on with other political groups. The Wall Street Journal reported last week that some European parties had shifted policy positions to align with what performs well on Facebook, including more negative content.

Like many conservative politicians in the United States, the AfD has been eager to court voters skeptical of COVID-19 restrictions and vaccines, leaning into a populist stance against preventative COVID-19 measures.

Many of the AfD posts inveigh against lockdown measures and suggest that the vaccines may not be as effective as health officials claim. A post about infections spread in a club that required proof of vaccination, for example, called vaccine-related restrictions quatsch, or nonsense.

The group’s posts remain popular, but it’s also not clear whether those posts are leading to new votes. The party is projected to end up in fourth or fifth place in the upcoming election.

Since the 2017 election, Medina Serrano said, the AfD’s explosive growth on Facebook seems to have leveled off. Now, he said, the party has gone from a strategy of looking to pull in new voters to one of cementing its base in German politics through Facebook.

“It’s more about maintaining the base than growing—it’s already capped, in my opinion,” Medina Serrano said. “But we’ll see the results on election night.”

Police Are Looking to Algorithms to Predict Domestic Violence

But will they be effective or reinforce bias-based practices?