In Georgia, Facebook’s Changes Brought Back a Partisan News Feed

As Georgians head to the polls to vote on their two U.S. Senators—and effectively, partisan control of Congress—on Tuesday, voters face an online landscape far different from what they saw in the weeks surrounding November’s general election.

In the fall, Facebook—by far the most popular social network—clamped down on sponsored posts about politics in order to ensure that misinformation would not spread the way that it had during the 2016 presidential election. But a few weeks before the Georgia race, Facebook turned off this safeguard in Georgia. The Markup decided to take a look behind the curtain to see if we could determine the impact on Georgia voters’ news feeds. We recruited a panel of 58 Facebook users in the state and paid them to allow us to monitor their feeds, starting in late November, using custom software we built for our Citizen Browser project. The Citizen Browser project is a data-driven initiative to examine what content social media companies choose to amplify to their users.

While Facebook’s controls were in place, we found that links to traditional news sites were present in almost all election-related posts that appeared on our Georgia panelists’ feeds. After Dec. 16, however, when Facebook flipped the switch to turn on political advertising for the Georgia election, we noticed that partisan content quickly elbowed out news sites, replacing a significant proportion of mentions of the election in our users’ feeds.

The Markup defined election-related content as anything containing mentions of Trump or Biden, the names of the four major-party senate candidates, or the terms “senate,” vote,” “election,” or “ballot.” We looked at the URLs attached to those election-related posts and tabulated the most common domains.

For the first half of the month, the most commonly appearing election-related content came primarily from news outlets such as The Wall Street Journal, CNN, and the Atlanta Journal-Constitution. But after Dec. 16,  just over one third of the most commonly appearing domains were partisan campaign sites buying ads, including WrongForGeorgia.com, an attack site targeting the Democratic candidates; and DeserveBetter.org, an attack site targeting the incumbent Republican senators. We discarded any domains that only appeared on a single panelist’s feed.

Frequency of election-related content by domain seen on panelists’ feeds 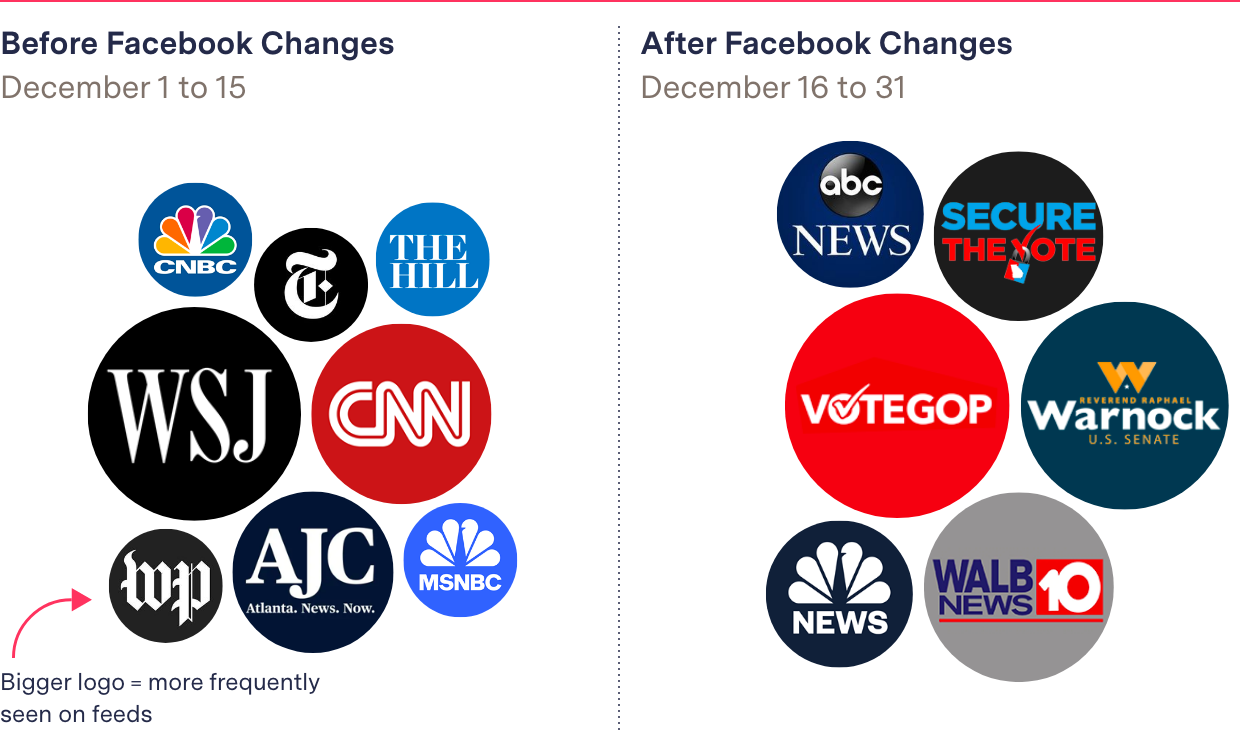 “In an election where millions of people have already voted, even this tiny sample size has reinforced a basic truth about politics,” Facebook spokesperson Devon Kearns said in an emailed statement. “[T]he closer you get to Election Day, the more political content everyone is likely to see—whether it’s online, in the mail, or on TV or radio. We’re connecting people to reliable information about the election and deploying the teams and technology we used in the general election to fight voter suppression.”

Emily Bell, director of the Tow Center for Digital Journalism at Columbia University, said Facebook is not transparent enough about how it makes and enforces changes like lifting the political ad ban.

“There is huge power and as we see in Georgia potentially significant consequences attached to what appear to be arbitrary decisions,” she said.

Along with advertisements displacing other election information on panelists’ Facebook feeds, we saw that:

Our observations have limitations. The vast majority of content that appeared on our Georgia panelists’ feeds during the month of December was not related to the election. Citizen Browser consists of about 1,000 panelists from all over the country, but The Markup decided to oversample in Georgia, because of the runoff elections. Of the 54 panelists from Georgia who sent us two or more data submissions in December, more than one-third (20 panelists) were not exposed to any election-related content on their feeds as defined by our keyword search. (For more on how we built the tool and our panel, see our methodology).

In addition, our panel is short on Latinos and Trump voters—groups that have been difficult for pollsters to reach. Our Georgia panel was 29.3 percent Black or African-American, 60.3 percent White, and only 1.7 percent Hispanic or Latino. According to 2019 American Community Survey data, current estimates are that Georgia is 31.9 percent Black, 57.8 percent White and 9.8 percent Hispanic or Latino.

And our sample size, when measured against the roughly 7.7 million registered voters in Georgia, is small. Nevertheless, we were able to get a glimpse of what happens on some people’s feeds when Facebook makes a major change to its ecosystem.

When Facebook began reallowing political ads in Georgia, the campaigns and partisan PACs reacted quickly, spending millions of dollars on sponsored Facebook posts in just two or three weeks. And that showed up in at least some Georgians’ feeds.

“In the last few weeks since the runoff election started, ad frequency has increased for sure,” said Matthew Revilla, 32, a physician assistant at the VA Medical Center in Atlanta. “Based on my experience, about 50 percent of the ads in my feed are now for Warnock/Ossoff, and about 50 percent are other ads based on my interests, like cycling and being outdoors.”

“I actually voted on the first day you could early vote, so for me it’s kind of wasted advertising,” Revilla said.

Three of the top 10 sponsored posts most widely seen by our panelists came directly from Senate Democratic candidate Rev. Raphael Warnock’s page: one video in which Warnock promises to “work night and day to get this virus under control” if elected; another encouraging Georgians to add early voting to their holiday list; and the last—among his few negative ads—suggesting links between Georgia Republican senator Kelly Loeffler and a known white supremacist.

Sponsored posts from the “GOP” page, administered by the Republican National Committee, were generally more straightforward, suggesting that Republicans request absentee ballots, and advising them that Loeffler, not Warnock, would “put Georgia first.”

Other sponsored content pointed users to WrongForGeorgia.com, a site that warns that if Democrats Ossoff and Warnock are elected, Georgians’ “taxes will be raised,” their health care will be “taken over by the government,” and “they won’t uphold our values.” More ads linked to DeserveBetter.org, a site that primarily consists of videos attacking Loeffler for only looking “out for herself” and Perdue for buying “PPE stocks the same day the Senate held a ‘members only briefing’ on coronavirus.” 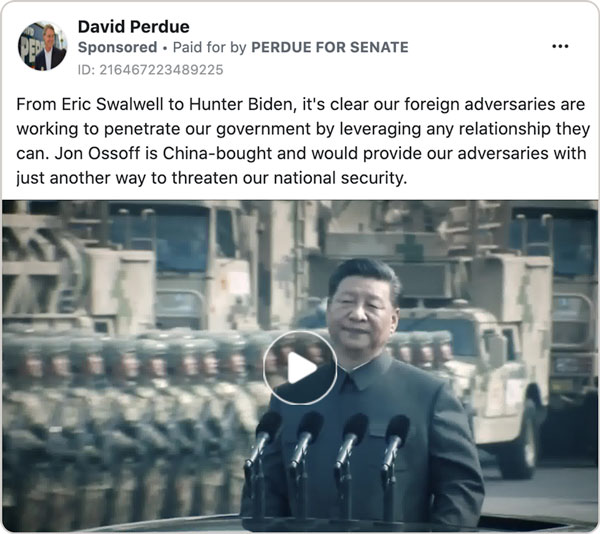 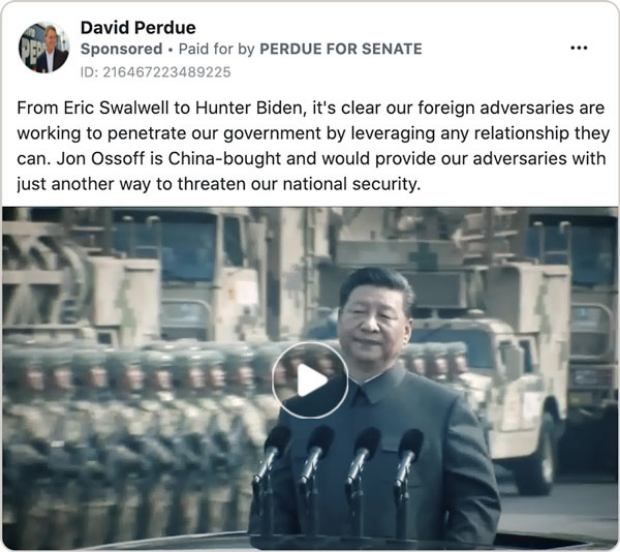 And then there was an ad from Perdue’s campaign, a video with an ominous score and sinister lighting over images of a waving Chinese flag and President Xi Jinping driving past a line of soldiers. In it, unidentified voices accuse Ossoff of “receiving funds from Communist Chinese controlled, funded entities” and having a family who’s “all sleazed up with the Communist regime in China.” (The Markup reached out to both the Perdue and Ossoff campaigns about the ad, but neither responded to requests for comment.)

Conservative news sites, meanwhile, garnered the most engagement of all the election-related posts on our panelists’ feeds. In the second half of the month, three of the top 10 most-reacted-to stories on our panelists’ feeds came from Newsmax—the smaller news channel that has been siphoning off Fox News viewers with its support for Trump’s attempts to overturn election results. One reported that a majority of Republicans wanted Trump to challenge election results; another discussed a potential 2024 presidential bid by Chris Christie; and the third covered Mitch McConnell blocking $2,000 stimulus checks.

Four of the top five highest-spending advertisers on Facebook are Democratic, outspending the GOP by three times to one

Spend by advertiser in Georgia for December 2020 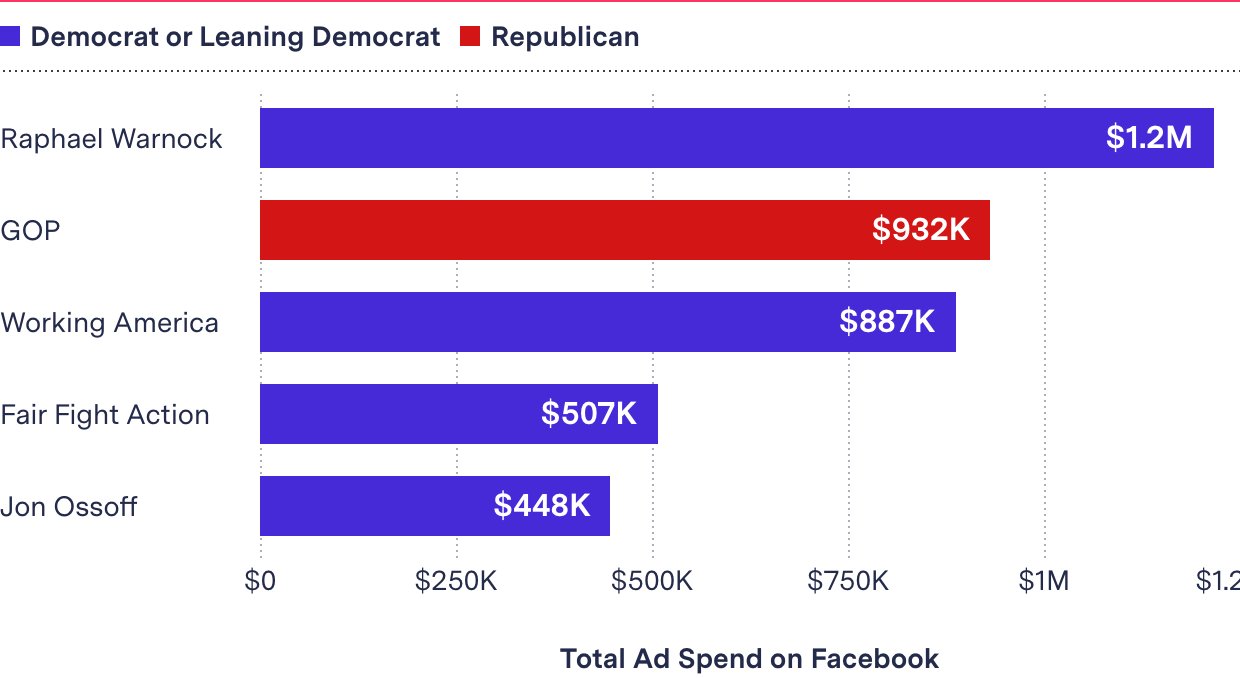 Fundraising for the Georgia runoffs has reached record levels. Spending on advertising has surpassed $450 million. Spending on Facebook ads was relatively low: According to Facebook’s data, the Warnock for Georgia campaign was the top ad spender on the platform in the 30 days from Dec. 2 to Dec. 31, with a total buy of $1.2 million across 205 different ads.

Joan Donovan, Research Director of Harvard’s Shorenstein Center on Media, Politics and Public Policy, said that despite the relatively small dollar amounts, Facebook has shown it continues to play a central role in election advertising.

“When they chose to shut down political advertising for the national election, it was because they were unable to monitor advertising at scale,” she said. “Returning service to political ads was not necessarily about the [Georgia] election, but more about Facebook returning to business as usual.”And business as usual has been quite profitable for Facebook: Last year it generated record revenue. As of the third quarter of 2020, the company was on track to surpass the previous year’s $70 billion in total revenue.

In Georgia, Facebook’s Changes Brought Back a Partisan News Feed