Are Your Country’s Cellphone Plans a Rip-off?

Are Your Country’s Cellphone Plans a Rip﻿-﻿off?

If you live in the U.S. or Canada, the answer is probably yes

Want a great data plan for your mobile phone? Then maybe move to Australia, where, The Markup found, data speeds are fast and plans are cheap. The U.S., on the other hand, has some of the most expensive, slowest mobile data among 28 countries studied.

The cost of mobile data plans—and their quality—varies widely across the globe, according to data assembled by The Markup, and often, you don’t get more for your money.

Take downloading an hour-long show on Netflix: In Australia, it’ll take you three minutes and cost 68 cents. In the U.S., downloading that same show takes twice as long, and you’ll pay $8 for the pleasure. In Italy, which has some of the cheapest data plans in the world, checking your Twitter feed will cost you a penny—compared with 15 cents in Canada, which is among the world’s priciest places to refresh an app.

Choose your country from the drop-down menu to see how your mobile data options compare with those around the world.

What You Get for Your Money in
Your Country’s

We’ve all experienced slow and inconsistent mobile data connections—speed varies with topography and proximity to cellphone towers, making it hard to measure. We used data from a 2016 FCC study that relied upon crowd-sourced speeds gathered through Ookla’s Speedtest apps. These apps are among the most widely used for speed tests and as a result gather a lot of data, which means that those inconsistencies are likely averaged out.

How long it takes to
Usage

Are You Still Watching?

Most phone plans come with data caps—and anytime you check Twitter or download a photo when not connected to a Wi-Fi network, that spends some of your allotted data and as a result has a cost. We used Cable.co.uk’s calculation of price based on cost per gigabyte under the cap.

In the U.S., the most common data plans fall between the 2GB and 5GB range—and are some of the most expensive in the world, resulting in an incredibly high price per GB. In Australia, however, most phones are bought outright (not paid for through a contract) and use prepaid SIMs—resulting in a market that just gets cheaper and cheaper.

In Canada, despite the recent introduction of unlimited plans, the overwhelming majority of packages still have data caps. Since Canada has such a large landmass, new companies struggle to establish reliable nationwide networks. As a result, only three national networks exist and can charge extra for that coverage. However, some costs vary regionally. Residents of Saskatchewan, for example, get access to SaskTel’s cheaper plans because the network provider maintains service only in that province.

How Much It Costs To
Usage

This article has been updated to clarify that the FCC study used included 28 countries around the world, not every country, and to include dates for the studies.

Mobile data price based on price per 1GB analysis by a 2019 Cable.co.uk study.

Visiting a website size (2.9MB) based on the average size of a website according to HTTP Archive, July 2020.

Checking Twitter size (12MB) based on data usage after two minutes of browsing according to Canstar Blue analysis.

Listening to a podcast (31.1MB) based on the average length of a podcast and average size per minute of a podcast. Data taken from Pacific Content.

Watching an hour of Netflix (1GB) based on the maximum size for an hour of standard definition video according to Digital Trends. 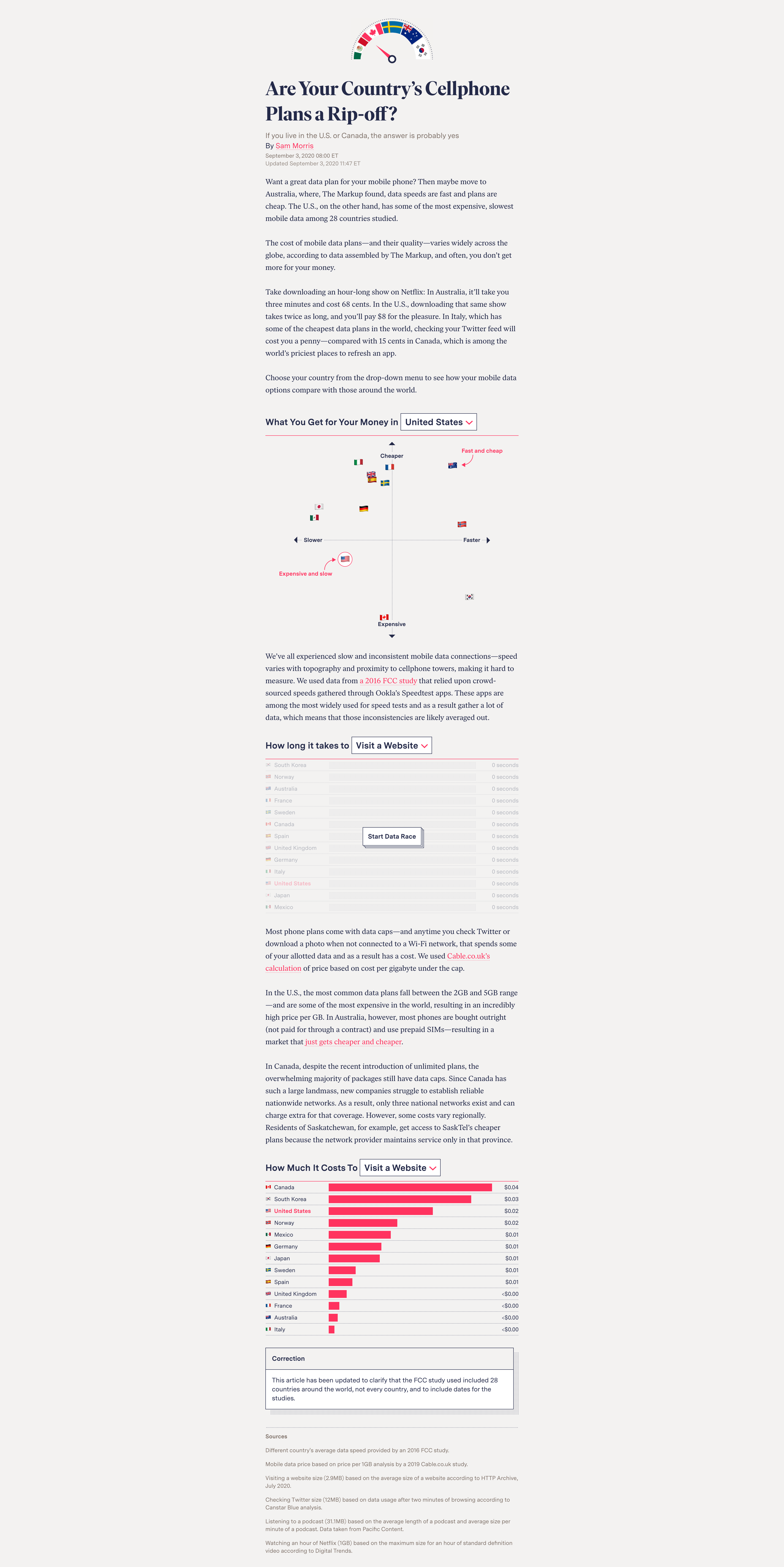 Are Your Country’s Cellphone Plans a Rip-off?