By Sam Morris and Colin Lecher
Viewable online at
https://themarkup.org/election-2020/2020/11/03/voting-machines-security-progress-by-states

By some measures, the 2020 presidential election could be the most secure in United States history. The pandemic and threats of foreign interference have set up challenges for states (and tech companies), but many experts believe that states have substantially improved the reliability of voting systems over the past couple of presidential election cycles.

“It’s apparent that we’ve made a lot of progress,” said Mark Lindeman, interim co-director of Verified Voting, an organization that advocates for paper-based voting systems and tracks voting machines by county around the United States. “We absolutely have.”

But progress has not been uniform, and as votes are tallied, you might wonder: How prepared is your community for this election?

The security of an election revolves around voting machine technology, so how much you can rely on your vote being accurately counted could depend on which state, or even which county, you live in.

Many jurisdictions, and the United States as a whole, have been moving over the past decade toward more secure voting systems, based around paper ballots. Others, however, still rely largely on electronic systems that experts fear could be tampered with.

Here’s an overview of what you will find around the country—and how secure those systems are thought to be.

The Voting Machines States Use Around the Country

In the past, elections have used paper ballots, lever-based voting machines, and punch cards or similar equipment. Today, you can broadly categorize the systems used in the United States into three categories.

Consider Utah, which was using direct recording electronic devices in every county as of the 2012 election, according to Verified Voting’s data.

But since then, most counties in the state—with the exception of the most populous county, Salt Lake—have turned to hand-marked paper ballots. Some changed over in 2016, and more will use paper-based systems this year. 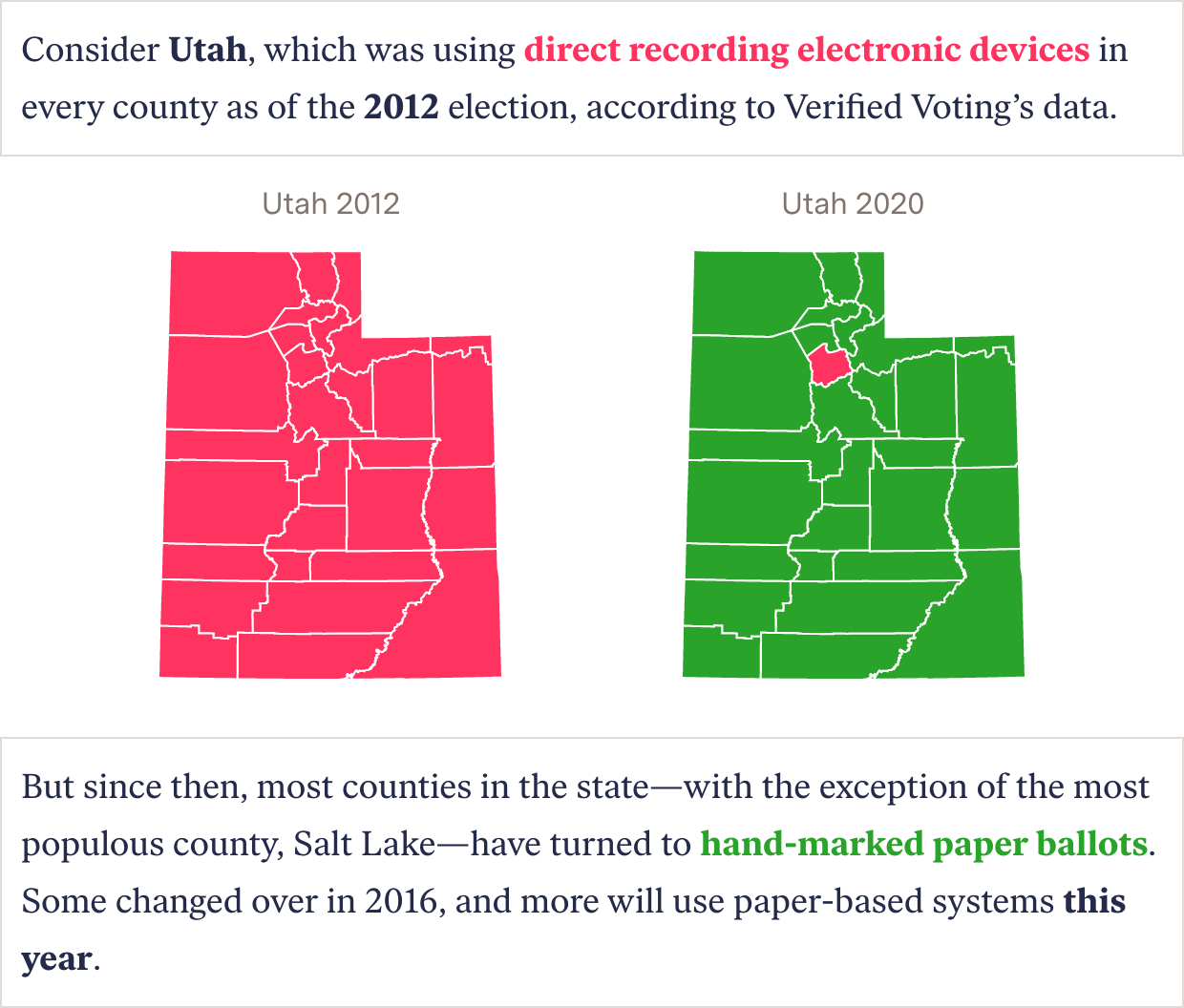 Since then, other states with the same setup, like Georgia and South Carolina, have switched to more secure systems. Louisiana hasn’t, and voters will continue using DREs for the 2020 election. The state had planned to switch to a different system for the November election, but a challenge to the bidding process for new machines pushed the change back. 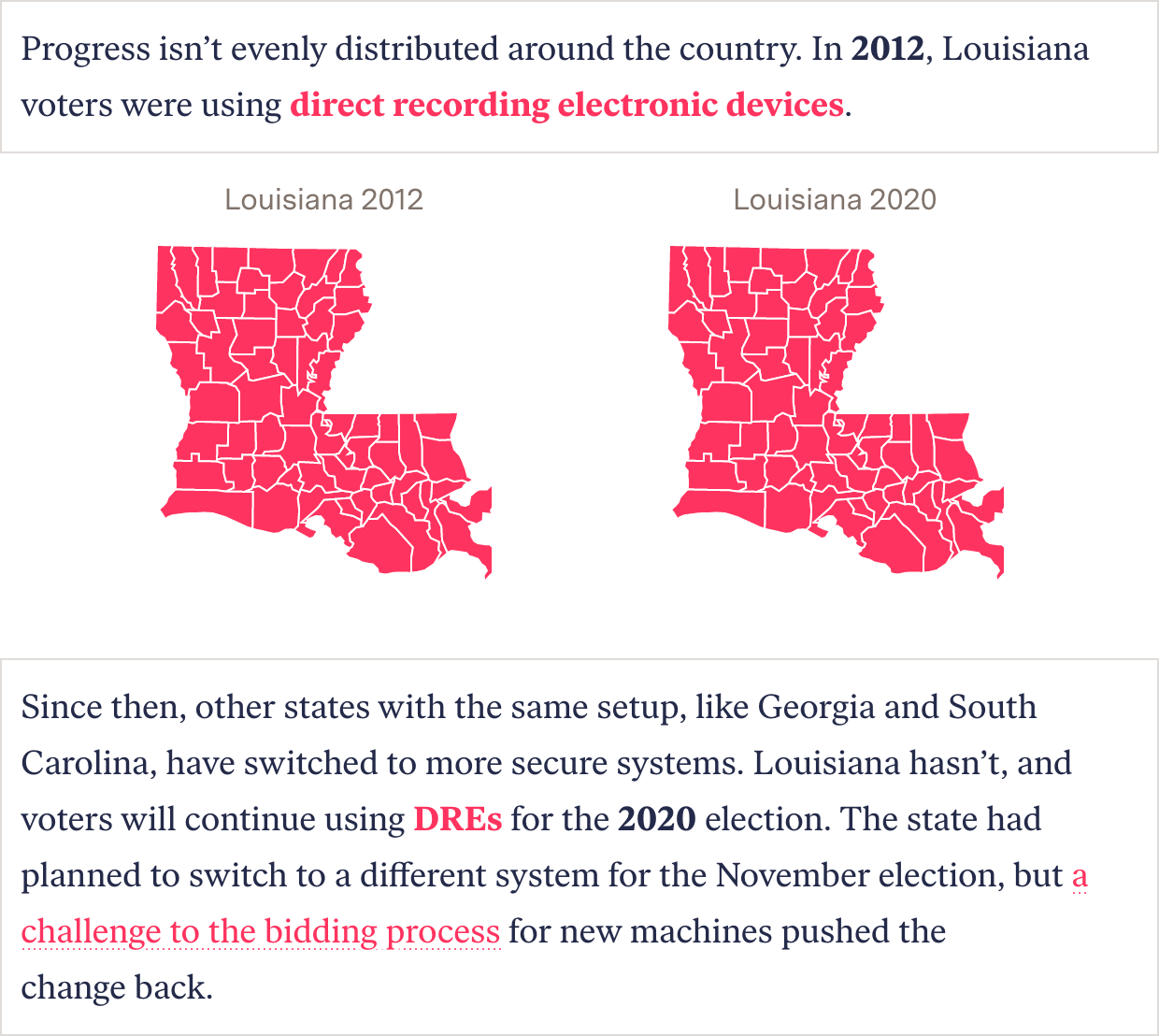 In most states, at least, your polling place is likely to have a system similar to those of your neighbors in nearby counties. But counties in some states make different decisions about the systems they use to run their elections, so you may not always vote in the same way as the people around you.

In Texas, for example, counties have chosen to use varying methods of voting for their elections, leading to a state-wide patchwork

If you live in Bosque County, for example, you’ll vote in the 2020 election using hand-marked paper ballots. But in a neighboring county, Erath, voters rely on ballot-marking devices, and in McLennan County, another neighbor, elections are run with DREs. 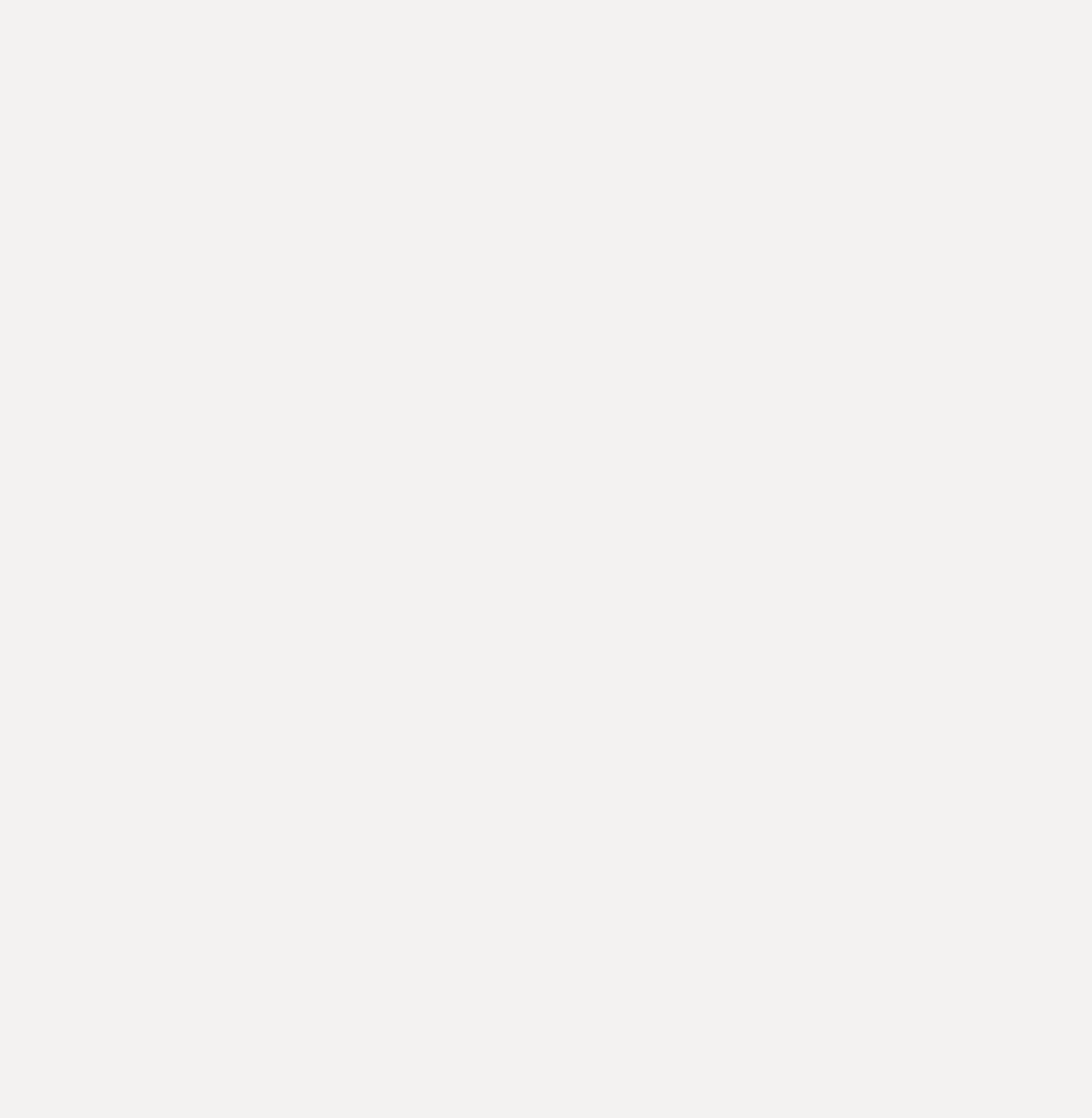 For many counties, change is slow to come. “Some states have a history of putting a lot of money into their voting systems every 14 to 20 years and then not doing much,” Lindeman said. Still, the progress, while uneven, has been notable—even if it doesn’t always seem that way.

“It’s been massive progress,” Lindeman said, “but in any given year it feels glacial.”