As part of a recent weekly update on education during the pandemic, Los Angeles Unified superintendent Austin Beutner announced a “sobering” fact: students are still struggling with the switch to online learning months after in-person classrooms shuttered.

“We can see it in attendance figures which are below those typically seen when students are at schools,” Beutner said in the address. “And we can see it in the assessments of progress students are making in their studies. Ten weeks into this semester the portion of students in both middle school and high school receiving D’s and F’s have grown compared to last year.”

Some middle school students, according to a chart he released at the time, were seeing the rate of D’s and F’s go up as much as 30 percent. And the students already particularly disadvantaged—those from lower-income schools, or those with disabilities or other barriers—have by far been getting hit the hardest.

The problems are now reverberating around the United States, as grades come in and students see sliding marks, raising concerns about how far behind students are falling—and why they’re being academically punished during a pandemic.

“I can say from my perspective, being graded makes it feels real—I’m more apt to try on an assignment if I know a letter grade is attached to it,” said RAND Corporation assistant policy researcher Melissa Diliberti, herself a Ph.D. candidate, who has been researching how educators are approaching remote learning. “But I also, as a student, appreciate some level of leniency. It’s hard to focus on things or to feel like the stuff you’re doing is worthwhile or important when the world is going to pieces around you.”

How Bad Is the Problem?

Los Angeles is hardly alone. Elsewhere in California, one San Diego superintendent told the Los Angeles Times that failing grades have more than doubled during the pandemic, to more than 14 percent of all marks. An Oregon high school told The Associated Press that failing grades had jumped from 8 percent of all grades to 38 percent in October. One Bay Area district told The Mercury News that they’d seen the number of students with more than one failing grade expand by more than 10 percentage points, to 29 percent, nearly a third of all students. The state is now facing a lawsuit claiming it has let down Black and Latino families during the pandemic, failing to provide equal education opportunity under the state constitution.

Around the United States, as grades trickle in, it’s become clear how devastating the switch to remote learning has been for many students. In Austin, early data released to local reporters noted that failing grades had increased by 70 percent. (A spokesperson for the Austin Independent School District, Cristina Nguyen, said more recently updated data showed the district overall didn’t see a statistically significant increase in failing grades, although secondary schools did see an increase.)

One notably detailed report from Fairfax, Va., on first-quarter grades found that F’s had increased from 6 percent the prior year to 11 percent this year.

The Increase in F’s Affected All Subgroups of Students in Fairfax, Va.—but Not Equally

Students with F’s in Two or More Classes 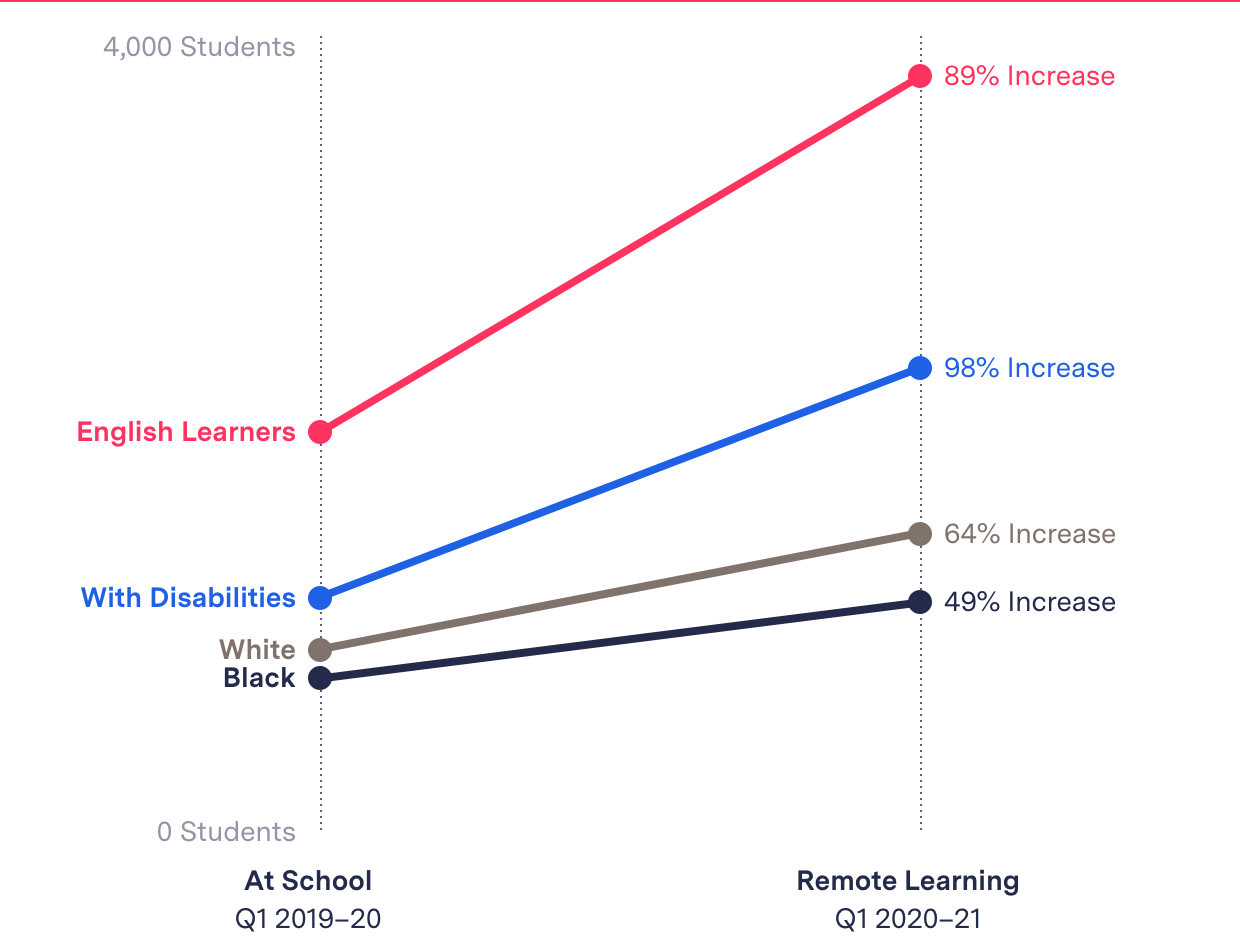 The report concluded that there was a “widening gap” among students: Those “who performed well previously primarily performed slightly better than expected during Q1 of this year,” according to the report, while “students who were previously not performing well, performed considerably less well.”

It’s clear that many students are still struggling with the switch to remote learning, with some facing more barriers than others.

The problems were hardly a surprise. From the earliest days of the pandemic, when schools first closed, educators noted declining attendance rates, often with the poorest schools seeing the largest drops. In August, for example, The Markup analyzed remote attendance for 800 Florida schools and found that low-income schools saw the heaviest drops in participation. Other research has produced similar findings from throughout the U.S.

While students are suffering emotionally, they’re also suffering from technical hurdles with remote technology, and those problems are disproportionately impacting students who already struggled the most with access to quality education.

Still, researchers and administrators don’t always have detailed enough data to track the specific things that are hurting grades the most. How many students fail to turn in an assignment, or are graded poorly, and how many never log in to the software at all?

“Clearly there’s some learning loss,” said Phyllis Jordan, editorial director at FutureEd, an education think tank at Georgetown University. “But we’re just not sure why they’re getting F’s.”

Attempts to Fix the Problem

Some districts, including New York City, are moving to bring some students back to class. But with infection rates continuing to shatter records, other districts are pushing back their reopening dates, some indefinitely.

“The simple fact is some students are struggling online,” Superintendent Beutner said in his address last month.

“The best solution for this is to get students back to schools as soon as possible in the safest way possible,” Beutner said. “We made a commitment to all in the school community to maintain the highest standard of safety at schools and we are taking all of the necessary steps to put this in place.” The district announced plans last month to bring some students back to school, but the most recent wave of COVID-19 cases has likely stymied any large-scale return.

In the meantime, some districts are changing what they can to reach students.

Fairfax County Public Schools spokesperson Lucy Caldwell said in an email to The Markup that the district has taken “some initial actions to support students during this very unusual school year” and will look for more ways to do so.

“Some examples include: we extended the first quarter, we enabled schools to offer ‘catch up days’ to their staff and students, we have issued ‘check in’ surveys to monitor how our students are doing, and we changed the expectation for workload outside of class,” Caldwell said.

And some schools, Jordan of FutureEd said, are simply forgoing grades in the meantime, turning to qualitative measures of success—giving broad feedback on a paper, say, without scoring it.

A recent report from Diliberti, the RAND Corporation researcher, and her colleagues found that as of fall of this year, only about 59 percent of teachers were giving students letter grades, while others had moved to a pass/fail system, providing feedback without a grade, or just checking assignments for completion. Even that was a dramatic increase from the spring, when only about 35 percent were assigning grades.

Some educators see the change in tactics as the most thoughtful way to help students through an unprecedented situation. As Jordan said one teacher put it at a recent FutureEd panel: “Grace over grades.”